Lee Is Looking For A Home

Meet Lee! He’s an adult cat who clearly missed his calling and should have gone into modeling instead of hanging out with a bum like me. I mean, look at those eyes. Lee was left behind at shelter by a family moving out of town and didn’t do well in shelters, but he was rescued by Pawsitive Karma Rescue. Now, he is showing his true colors: He’s sweet, well mannered, healthy, and gentle yet playful.

Lee is a great roommate. We’ve been living together for two months now and he’s the best. Always listening when I need to tell someone my problems and hanging out while we watch TV (well I watch it, he mostly naps next to my legs). He loves to be petted and will sometimes just come and visit me for some pets. He’s not a lap cat, but will curl up against me in bed. He does like to hang out and will occasionally start conversations, but never pushes the point if I’m busy. He also likes to play and is really into hunting objects on the ends of strings. He may be 8 years old, but he will leap and catch with the best of them.

He’s incredibly well behaved. He has never had any problems with the litter box and has never even scratched me even by accident (even when I was trying to cut his nails or take out his stitches). He’s not even much into jumping up on things; he doesn’t seem to want to go higher than chair level. He’s curious, but gentle in his explorations and never knocks things over. He also doesn’t seem to scratch furniture.

Overall, Lee is just a super cool cat. He’s chill and likes hang out, but doesn’t make a big deal out of it and doesn’t want to make any trouble.

PS: The scratching board in the last picture will come with Lee when you adopt him. He loves that thing and I wouldn’t dare separate them. 😉 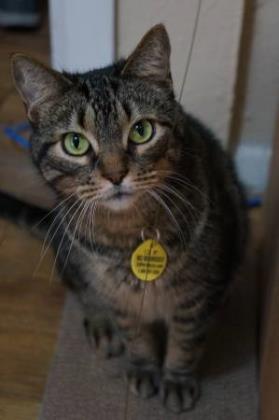 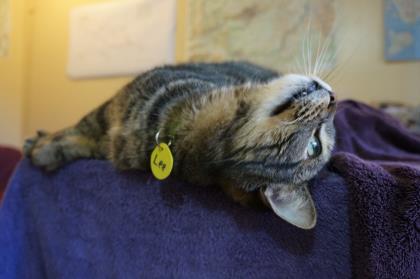 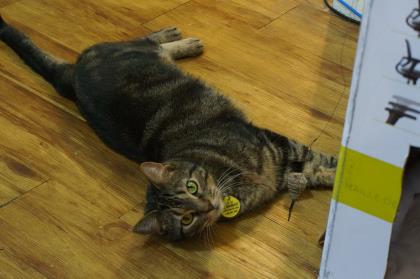 All PKR adoptions include spay/neuter, vaccinations, microchip, dewormer, flea/tick and heartworm preventative, combo test, 30 days of free pet insurance, and guarantee your pet has had a high quality diet and vitamins as long as it has been in our program. Adoptions include 1 bag of Precious Cat “Cat Attract” Litter. *While supplies last* To start the adoption process, fill out the cat adoption questionnaire. Feel free to email with any questions you may have! Adopt@PawsitiveKarmaRescue.com